In the afternoon, Shen Chi sat in a chair and squeezed time to do the problem. Yan Xue Xiao arranged a thick stack of real problem materials for them in front of the supermarket.

Seeing that the young man’s handwriting is neat and beautiful, Zhuang Zhou next to his seat looked at his crooked characters, he lowered his voice and asked: “Can you copy the letter for me?”

Shen Chi did not lift his eyelids: “No.”

Zhuang Zhou was not surprised by this answer. He thought about Shen Chi’s preference and said, “I will ask you to eat strawberry-flavored cake tomorrow.”

The boy was finally willing to look up at him.

Faced with the lion’s big mouth, Zhuang Zhou nodded in pain, and looked around to make sure that no one was looking at him. Secretly opened the phone, sent a long text to Shen Chi, and handed a piece of pink letter paper from the bottom of the table. .

“You must never tell others.” Zhuang Zhou instructed.

Shen Chi looked at the pink letter and raised his eyebrows. At this moment, the infrequent ‌ ringtone rang, and someone was outside ‌.

Although he didn’t know who would come to ‌ to visit, he got up from his seat, clamped the paper in the exercise book, walked by ‌ and opened ‌.

Yan Jianguo, was wearing a worn-out army coat, stood outside, his neck shrank and he appeared shorter, and he carried a bag in his bruised hands: “It’s hard to study, knowing you haven’t finished class yet, so I want to give you guys some snack. I have Guokui for you to cushion your stomach.”

The young man’s eyes fell on his shameless Guokui, and Yan Jianguo anxiously said, “I make delicious pie. If you don’t believe me, ask Ah Shen. He used to eat half a pot of cakes I made.”

Yan Shen on the seat did not say a word, unexpectedly he did not refuse, Shen Chi looked at Yan Shen, and took the steaming Guokui from the short middle-aged man.

“I will stop disturbing your studies, I will come again tomorrow.”

The corridor was cold, the young man took Yan Jianguo’s Guoki and he immediately raised his eyebrows and grinned, rubbing his frozen hands and closing his hands. He walked home while calculating what kind of cakes to bring tomorrow. .

Teacher Yan refused to accept supplementary tuition fees, nor did he accept any gifts. He had never seen such a good person before, so he could only send some food to show his heart.

The light in the corridor of the residential building broke down again, and he needed a flashlight to grope upstairs. He just walked up the stairs and saw the lights were on, and heard the occasional conversation.

The conversation gave him a lot of peace of mind. Yan Jianguo turned off the flashlight and stepped into the house, but as soon as he stepped in, he saw a stranger sitting on the sofa. It seemed that he had been waiting for him for a long time. He smiled and greeted him: “Hello.”

The blind wife thought it was Yan Shen who had returned: “Ah Shen, there is a guest at home.”

The man stood up from the sofa, his tone tinged with a hint of danger: “Have you considered the business I said last time? The boss is not willing to give much time.”

“That’s not your business. You only need to know that he is blocking other people’s way. Don’t ask if you shouldn’t ask. I found you because of your tight lipped mouth.”

He looked at the photos hung on the wall: “It’s a pity, I thought I could see your son. Your son is going to take the college entrance examination this year, so he spends a lot of tuition fees. If you are a father, you still have to think about your children.”

Yan Jianguo looked at the photo. The yellowed photo showed a woman holding a boy. At that time, he had not been imprisoned for money. He also had a happy family. Every day, he made Guoki for his son, and the kitchen is filled with warmth.

Reading the threat under the subtext, Yan Jianguo squeezed his hand and nodded. There was a daze in his eyes. It seemed that tomorrow he could not bring the children cakes.

Shen Chi walked back to his position, he put the bag with gouki on the table and opened it, and the aroma of brown sugar mixed with noodles filled the heated room.

“It smells so good.”

Zhuang Zhou stretched out his hand and took one. Shi Liang took half of it, and even Yan Shen, who was sitting on the edge, lowered his head and ate one. There was a sweet smell of brown sugar everywhere.

Shen Chi has no resistance to sweet things, biting open the soft dough, which is filled with brown sugar, the boy’s amber eyes bend.

They left a share for Yan Xue Xiao, and ate the pots(Gouki is also called brown sugar pot). The teenager opened the screen after eating and clicked on the message from Zhuang Zhou:

Hello Xiaozui, the first time I saw you was in the photo, and the second time I saw you in the empty school, the moment you came out in a white skirt in front of me, I was satisfied. For all the definitions of , I don’t know why I want to write a letter. I probably just want to tell you that you are the best girl I have ever seen. I am very happy to meet you.

Shen Chi recalled that there was no girl named Xiao Zui in the class. The original landlord Hong Jie had a daughter named Lin Zui. I don’t know if it was Xiao Zui in Zhuang Zhou’s mouth. He once met her in front of the residential building.

He didn’t want to write the text, but he couldn’t resist the temptation of strawberry-flavored cakes, and he picked up a pen to transcribe on pink letter paper.

The audience who supervises the study in the live broadcast room is vigilant.

“What are you writing? Let mom see it too!”

“Pink letter paper, isn’t it a love letter? It seems that it’s not for a daughter-in-law to look secretly.”

“I heard the sound of opening door ‌”

Just halfway through the transcription, Yan Xue Xiao came back. He stopped writing and inserted it into the exercise book and continued to work on the questions.

The teenager devoted himself to solving the ‌ problem, and after finishing ‌, he submitted the homework for ‌ correction, but forgot the exercise book ‌ and had the pink stationery.

Shen Chi watched the young man’s actions and was hesitant to speak, he was the first to hand in and he has the most correct answers.

When everyone left, the young man began to correct his exercises. He couldn’t help but asked nervously, “Is it wrong?”

Yan Xue Xiao just glanced at him faintly. The teenager in the seat became more nervous, but he walked by and saw that the questions he had done were all right, and put his heart down.

He took back the exercise book and was about to put it back on the table. A piece of pink letter paper floated on the floor. He turned his back to Yan Xue Xiao and quickly picked it up from the ground.He did not know if Yan Xue Xiao saw it, but the idea just flashed by.

He sat in his seat and did reading. After learning all the grammar today, the original complicated grammar formed a clear frame in his mind, and the long and difficult sentences were easily solved.

However, the problem is that the reading speed is slow, so he has to analyze the sentence components slowly. It usually takes seven minutes to finish reading. He can only improve his speed by reading one by one, but the speed is not obvious.

He kept doing it at night, returning to his room to hug the pillow and he gently pushed away Yan Xue Xiao . The room was dark, and the teenager was sleeping beside Yan Xuexiao, like a puppy lying quietly on the bed.

However, this time is different. The puppy who climbed into bed just lay in bed and was ready to sleep peacefully. Yan Xue Xiao’s voice rang in his ear: “Go back to your own bed.”

The boy’s body froze. He did not expect that Yan Xue Xiao was not asleep at this time. His heart was pounding with tension and stammered to help himself: “It’s cold.”

He was right. It started to snow early in the border town. There was thick snow on the ground. You must wear a scarf and hat when you go out, and you will be cold when you sleep alone. Two people sleeping together is much warmer.

Yan Xue Xiao’s voice is calm: “There is heating.”

Seeing that he was stabbed mercilessly, the teenager couldn’t think of anything else. He decided to hold his brother and pretend to be dead. He hid his furry head in his pillow and replied in a muffled voice: “I have slept.”

The air was silent again, Shen Chi heaved a sigh of relief, and felt quite relieved in the warmth , but when he was about to close his eyes, he heard the young man ask in an uncertain mood: “Is Xiao Zui good looking?”

Who is Xiao Zui?

Shen Chi’s head turned several times, and he slowly remembered that Xiao Zui was Zhuang Zhou’s crush. He immediately explained: “I didn’t write that love letter. I wrote it for Zhuang Zhou. He promised to bring me two small strawberry cakes tomorrow, but she is really beautiful and looks beautiful in a white dress-”

He carefully introduced the appearance of Xiao Zui, but before he could finish his words, the pillow that was covering his head was suddenly torn off, and the young man leaned over him in the next second.

The air is overwhelmed with a cold pine wood breath. The distance between the two of them is so close that they can feel each other’s warm breathing. They are closely attached to each other through the pajamas that are not too thick, and the scorching temperature gradually spreads between the skin.

His throat suddenly swallowed, his ears quickly turned red, he held his breath at a loss, and strange and strange emotions filled every corner of his body.

Even in the dark, he didn’t dare to look up at Yan Xue Xiao’s eyes. Hearing ‌ his heart beating more and more fiercely, it seemed that he would break his chest in the next moment.

Just as his brain was blank, Yan Xue Xiao leaned over his neck, his cold lips rubbing the skin, and whispered to him as if bewitching him: “Puppy love is not allowed.” 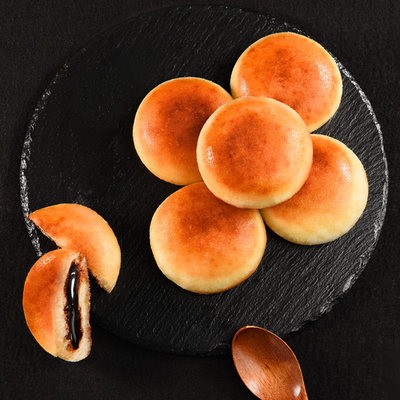 This is the food Yan Shen’s father gave them

I Became the Koi Actor After Entering the Book Ch. 43
8

I Became the Koi Actor After Entering the Book

The Villain is Born with a Sweet Tooth

My Shit Shovel Officer is Cute